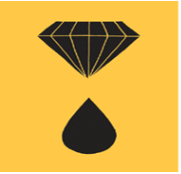 The science of economics has mesmerized great minds by occasionally taking a philosophical turn. Classical economic concepts sometimes starkly reflect the nuances of life. This article seeks to explore the psycho-social implications of the paradox of values and how psychology of humankind has affected this economic concept.

Valuation economics has been posed with many confounding challenges, the paradox of value being one such concept. The paradox of value is popularly known as the diamond-water paradox, owing to the age old model displaying the stark difference in value of these two commodities. The market value of diamonds is much higher than that of water, the former being a superficial luxury whereas the latter is an essential necessity. Diamonds have little bearing on human lives and are yet priced higher than water, the base of survival. This contradiction in the ‘value-in-use’ and the ‘value-in-exchange’ of commodities represents the esoteric nature of this dichotomy of valuation, the ignorance of the value-in-consumption (desire) explaining much of its counterintuitive implications.

The sublime and emotional sides of valuation are what make this paradox so dynamic. Although the subjective theory of value and marginal utility analysis provide a satisfying enough explanation for this contradiction, the recurrence of its implication is still mystifying. The fundamentals can be correlated with the analysis of the sectoral contribution in the economy.

The three sectors of an economy work in a continuum with the secondary sector largely dependent on the primary sector for raw materials and the tertiary sector relying on both its co-sectors. Empirical evidence states the fact that as an economy develops, the primary sector contributes less to the National Output. But many a times, the decline in its contribution is associated with deeming this sector less-important. This is where the paradox of value comes into play.

The primary sector provides for our basic needs while the secondary sector goes above and beyond to satisfy our superfluous wants. From a sociological standpoint, it seems strange that a sector providing for the foundation of our survival as well as that of the economy is considered inferior to the secondary sector. The fact of the matter is that in developed nations, the agricultural sector is already well-progressed so as to shift focus to the other two sectors in order to boost the standard of living. This implies that as the probability of satisfaction of our basic needs becomes stable, we move on to paying more emphasis on value addition to our material environment. Thus, the paradox of value is simply based on human nature.

Humans tend to give less importance to things that they know shall be more or less constant in life and that act as a foundation to life. This is because once that foundation is in place, we aspire to build it up into a further life-enhancing structure. Aspirations and desire bind the paradox of value which stems from nothing but the principles of life. As economics is largely based on human behaviour the paradox is studied as an economic concept. Paradox makes economics interesting in its slight uncertainly, leaving room for hope.