The story so far:

It is 120 minutes into the Ghana vs Uruguay World Cup Quarter Finals. After Muntari and Forlan’s magnificent goals, neither team has been able to break the deadlock. In extra time, Ghana is awarded a penalty kick on Saurez’s hand ball, one which would surely have put Ghana into the semifinals. But in a tragic turn of events, Gyan’s shot hits the crossbar, keeping the score tied at one. With neither of the teams scoring in overtime, the match is headed for a penalty shootout…

Last week we left you at a cliffhanger. Today we are back with a behavioural take on the sensational penalty shootout that earned the Ghana-Uruguay match the title of being ‘one of the most legendary matches’ in the history of Football.

The penalty kick, perhaps the cruelest facet of an otherwise beautiful game, is a subject worth exploring in the realm of football. As far as the goalkeeper is concerned, a penalty is a fight against towering odds. The keeper has to defend a 192 square feet goal, from a shot taken from just 36 feet away, at a speed upward of 80 miles/hour. Undoubtedly, the chances of a save are very bleak. Research done by the BBC shows that between 1982 and 2014, only about one in five penalties—49 out of 240 attempts—have actually been saved in a FIFA match. Of the 49 shots, the post or the crossbar saved 12, putting the odds of a save at only 15%. Needless to say, the goalkeeper is under tremendous pressure during a penalty shootout. More often than not, he has to guess in advance which way the kicker will aim and dive based on pure instincts. All this while the rest of the team—and millions of fervent fans—watch helplessly, pinning their hopes on the man in the gloves. Can you imagine the pressure that weighs on the keepers’ shoulders! 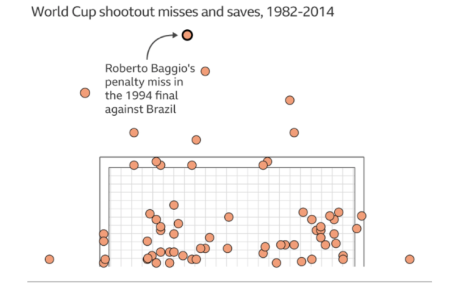 From our casual foray into behavioural economics and football in last week’s article, we know that pressure influences the player’s actions significantly. The penalty kick in football is among the highest-pressure moments in all of sports. Some claim that a football penalty is a lottery, i.e., it’s based purely on luck. I would like to argue otherwise. A penalty can be studied as a manifestation of smartly used behavioural economics. The action sets are pretty well defined; the job of the striker is to direct the ball into the scarce space of the goal and that of the keeper is to place herself so as to stop the ball from entering that space. However the decision is to be made in a matter of milliseconds and is often distorted by behavioural biases.

An interesting anecdote that demonstrates what pressure can do to players is a strategy adopted by the German goalkeeper Jens Lehmann during a penalty shoot-out against Argentina in the 2006 World Cup. Lehman used to pretend to study notes before each player took their shot. The notes contained no information whatsoever, but they forced his opponents into over thinking which led to many failed penalties. Thus, by amplifying the pressure on the shot-takers, Lehman successfully decreased their probability of scoring. It is clear that the heightened pressure acting upon the players can have a distortionary effect on their decision-making. Most times, this pressure ends in mistakes.

In the Ghana vs Uruguay game, the miscalculations were abundant on the Ghanaian side. The first penalty was taken by Forlan who scored; the Ghanaian keeper, Kingson, having dived the wrong way. Gyan followed with a goal for Ghana and so did the next 3 shot takers, scoring for their respective teams. The penalty score stood at 3-2, when Ghana’s John Mensah missed! It was a poor penalty—weak, with no run-up—and rolled to the left of the keeper, nowhere near the corner. This was Ghana’s first miss and pressure mounted. Uruguay’s Maxi Pereira went next but shot over the crossbar. Ghana still had a chance. But the last shot by Adiyiah was saved by the Uruguayan keeper, Muslera. And with that, Ghana’s fate was sealed. Ghana, ‘The hope of Africa’, who had dreamt of being the first African team to reach FIFA semi-finals was defeated on penalties.

All through the penalty, Kingson—the Ghanaian goalkeeper—was on an edge and seemed to be almost primed to dive to his right. Twice he jumped too soon, giving the shooter a clear advantage. It was apparent that he was playing under tremendous pressure which was affecting his decisions. It is interesting to see what biases can result from such pressure. In a research on penalty saves done by Azar et al, the authors report that most goalkeepers tend to jump to either corners of their goal during penalties, even though the chances of saving are highest if they stay near the centre of the net. Why does this seemingly thoughtless behaviour plague the best of the keepers?

The Inaction Bias can explain this phenomenon, which is the tendency among humans to prefer action to inaction. The bias acts like this. If the keeper jumps and is still unable to save, subconsciously, he can blame the miss on bad luck. However if he stays at the centre and misses, it looks as if he did nothing to save the ball. Thus, from his perspective, it is better to be active, making it look like he is making an attempt than to stay inactive at the centre and be blamed (unjustly) for not trying. So, keepers prefer action to inaction. This tendency is similar to the frantic swerve made by a person at the wheel to avoid an oncoming car. Most times it is this irrational swerve that kills rather than the collision. By forcing themselves to act—and act fast—the goalkeepers shake off a part of their responsibility and can thus attribute their failure to externalities.

If goalkeepers are affected by pressure, so are the strikers. Steve Levitt, the author of Freakonomics found in a research on Penalty kicks that strikers have a tendency to take decisions that defy known odds of success. Upon studying penalty kicks from French and Italian domestic leagues from 1997 to 2000, Levitt discovered that taking a shot in the middle had the highest success rate of 81% as opposed to kicking to the right (70%) or left (76.7%). However contrary to rational expectations, the percentage of times that strikers aimed at the middle was a mere 17% as opposed to right (38%) and left (45%). Why so? Well, it is all a game of expectations. The shooters expect that a shot in the middle has a higher chance of being saved (since it can come within reach of the keeper even if he dives to either side) However what they don’t realise is that since most keepers are primed to jump early, aiming at the centre has the highest expected probability of scoring.

All these instances show us why cold game theoretic logic may not always work when talking about hot blooded games like football. The heightened pressure acting upon the footballers distorts their decision-making abilities. After all, many a careers are hinged upon those 90 minutes of intense competition and rational decision-making often goes out the window when speaking of a war of nerves that is the game of football.