One of the most unconventional ways to know if we are headed towards a recession is by looking at a baby’s bottom. Yes, that’s right. Studies find that parents end up changing baby diapers less frequently in times of a recession, which in turn causes an increase in the sales of baby rash creams. According to data from Symphony IRI, sales of rash cream increased 2.8% at a time when diaper sales went down 9%. Another such unconventional predictor is the freight rail waste data put up by the American Association of Railroads, intuitively working on consumption, construction and other such activities and the amount of garbage they create. Either way they are a sign that something just doesn’t smell right.

What is a Recession?

Before we move on to more formal methods of predicting a recession, it would be prudent to understand what exactly we mean by an economic recession. A popular rule of thumb that most economists tend to follow is the two-quarter rule. First published by Julius Shiskin in The New York Times in 1974, a recession is a decline in the seasonally and calendar adjusted real GDP in at least two successive quarters. There are many other definitions but one that comes close to an all-encompassing explanation is by Pami Dua, Professor Delhi School of Economics, in a working paper titled, ‘Business and Growth Rate Cycles in India.’ She says, “A recession occurs when a decline – however initiated or instigated – occurs in some measure of aggregate economic activity and causes cascading declines in the other key measures of activity.” The domino effect in light of this economic downturn is best expressed in terms of a rhyme I came up with that we should all be familiarised with as macroeconomics students:

The dip in sales leads to fall in production,

Causing an income and employment reduction.

And with the consumer’s no confidence motion,

The vicious cycle ends in recession.

One important indicator we must look at is the inverted yield curve. When a CNBC reporter cried out, “We have inverted!” in March this year, he led company boardrooms and political campaigns into a frenzy of fear. The yield curve is a graph showing the relationship between the short term and long-term interest rates in the US treasury bond market. As you are taking a bigger risk by letting the government hold your money for a longer period of time, they also tend to fetch you a higher yield than short term investments. However, when the investor has very little confidence of the market in the near future, the demand for short term bonds, say 3-month, sinks and they start selling for cheaper. At this same time, the demand for long term bonds, say 10-year, shoots up as people consider it as a safer investment. With this, the price of 10-year bonds rises and the yield derived from the 3-month bonds is comparatively higher. And voila, “We have inverted!” If we look at the graph below, we can tell the curve has inverted every time it falls below zero.

When Arturo Estrella, a former New York Federal Reserve economist, came up with the indicator in the late 80s, he felt that the current monetary policy has such a significant impact on the yield curve spread and hence on real activity over the next several quarters. He used the probit model, where the probability of being in a recession is directly related to a specific explanatory variable such as the yield curve spread. This indicator has been able to rightly predict every one of the last five recessions 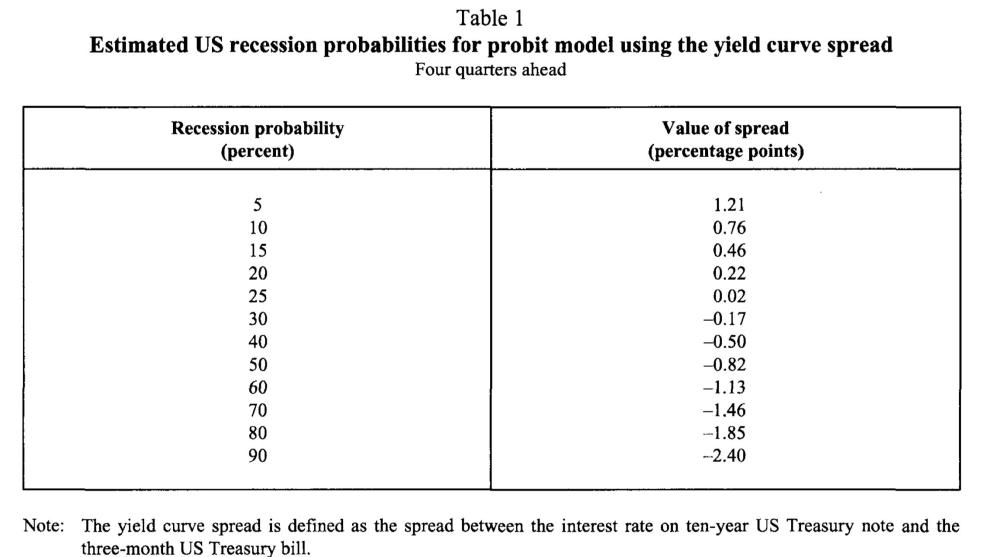 Indian bond markets may not be as robust as the US markets, which makes it harder to use this indicator in our sense. However, the interconnectedness of the global markets and the scale of the influence of American markets means we cannot ignore the consequences it represents.

Claudia Sahm, an economist at the Federal Reserve argues that when the three-month average unemployment rate is at least 0.5 percentage points above its minimum from the previous 12 months, the economy is in a recession. Simple as it sounds, this measure has rightly predicted every single recession in America for the last five decades. One of the most commonly used indicators of a recession in India is when there is negative economic growth for two successive quarters in terms of GDP.

A more informal indicator is the R-word index which measures the number of times the word recession is used by financial journalists in newspapers. This measure, believe it or not, has been quite effective as well, doing a fine job of predicting the last three recessions in the US. Hence, in my efforts of writing this article, I may have inadvertently set in motion another recession (let us assume I write for The New York Times or The Washington Post).

How good are these indicators?

A weather report in the middle of a storm is just plain futile. A good indicator is characterized by its ability to buy us time. While the inverted yield curve and the R-word index give an indication about a year in advance, the unemployment index only gives a few months’ heads up.

Some argue that watching the curve so closely might have actually undermined its impact as an indicator. Something known as the Heisenberg Uncertainty Principle in quantum mechanics, put simply, states that something that is being observed is going to act differently than when it is not being observed. Be it the diapers, yield curves or the R-word, it all leads us to one important question. Could it all just be in our heads? The writer does not doubt the presence of a downturn, but only professes finding the solution where the problem lies.

If we are not already in a recession, we are surely headed towards one if we are to go by what these indicators or seasoned economists like Dr. Manmohan Singh and Raghuram Rajan have to say. With the collapse of trust and confidence in the usual credit channels and the banks shying away from adopting the repo rates, the only way to rekindle investor confidence seems to be through fiscal measures. In fact, an IMF paper titled, “Monetary Policy Transmission in Developing Countries,” (P. Mishra et al., 2016) finds that there was no evidence of a transmission from monetary policy to aggregate demand, especially due to the informal nature of the financial sector.

So, setting the virtuous cycle back in progression,

Nevertheless, we must understand that the art of predicting a recession is quite complex and that an appropriate indication would be an interplay of economic, social and political variables. So, till we can be sure of the efficiency of these indicators, we may have to depend on some quotidian signs around us. A fall in the number of ketchup sachets in your lunch order at McDonald’s or worse- an increase in the number of hand-me-downs from your elder siblings. So, the next time you hear a baby crying endlessly at night, it might have to do more with state of the economy than you think.