A recession implies significant decline in overall economic activity, usually due to a drastic drop in spending and has widespread effects such as unemployment, lower wages, and lost opportunities.

So how exactly should the government wrap its head around these mammoth issues?

The very nature of recessions suggests that the economy is in dire straits and in need for a monetary boost to attain higher levels of economic activity, which will stabilise over a period, reaping economic growth. The government is a key player in such a situation as it is not led by a profit based motive, rather, overall economic welfare. Spending hikes, therefore, would be a perfect solution in battling recessions.

According to Keynes, fiscal stimulus and freedom from a state of economic slowdown in such a situation can only be achieved by an “injection” of government spending into the economy. He classified government spending under two heads: current spending, which relates to wages and raw materials that need to be renewed each year; and capital spending. This government spending could be in the form of structural government spending such as infrastructure, transport, education, public utilities, and so on, with a view that the investment will yield long term economic gain and overall economic growth.

This may lead to a controversial angle – where do we get the money from? While most economists have preconceived notions regarding spending hikes, let us break this down bit by bit.

Will real GDP rise if taxations and government spending are increased by the same amount? Yes. In a recession, consumers have already stopped spending which leads to an increase in private sector savings, due to which a rise in taxes will not affect the overall market spending. The government can use this opportunity to borrow from the private sector, and it can act as an expansionary fiscal policy to boost economic growth.

Tax cuts, on the other hand, are bad not only for the long-term fiscal outlook, but also the long term economic outlook, as stated by the Congressional Budget Office. Tax cuts would result in smaller domestically owned stock of capital, and there would be no guarantee of these savings being injected into the economy, leading to a further state of recession. To be exact, extending the tax cuts permanently could reduce GNP in 2020 by as much as 2% and anywhere from 2.5% to 11% by 2040. Further, tax cuts benefit the rich at the expense of the poor, as the services that will most likely get cut are beneficial to the poor; as seen with the repeal of the Affordable Care Act’s individual mandate in America in 2018 after the implementation of tax cuts by the Republican government.

As stated by Ha Joon Chang, “Once you realize that trickle-down economics does not work, you will see the excessive tax cuts for the rich as what they are — a simple upward redistribution of income, rather than a way to make all of us richer, as we were told.” which reinforces the importance of governments opting for spending hikes in times of recessions.

Increased government spending causes a “multiplier effect”, which occurs when the initial injection into the economy ripples and causes a bigger final increase in National Income.  For instance, if the government spending is targeted at increasing job opportunities for the unemployed, it will generate income among that group, and their expenditure (in the form of consumer goods, transport – really, the list of human wants goes on) will benefit different sectors of the economy.

The largest ever increase in government spending as a percentage of GDP occurred during post war periods, when economies were plagued, and governments had to find a way out. In the UK, close to 70% of the GDP was spent to create the welfare state – NHS, which included welfare benefits and council housing. Today, the NHS is regarded as one of the best healthcare systems in the world.

The way the UK pulled itself out of their state of debt in post war periods due to an increase in government spending is a textbook case of how taking care of economic growth and unemployment play a considerable role in reducing debt to GDP ratios.

After the Great Depression in 1929, President Roosevelt eased the situation by spending on job creation programs; Barack Obama ended the Great Recession in 2008 with the introduction of the Economic Stimulus Act, which spent $224 billion in education and health care; American President Eisenhower built the Interstate Highway System during the recession that followed in the post war era.

Lastly, approaching something that we are currently living through – the Corona Recession.

According to a report published by the IMF, increasing spending by just 1% of GDP could create 33 million jobs. Kristalina Georgiva, the managing director of the IMF has called for governments to ramp up their public spending, and warned them against prematurely withdrawing the help they have provided, in fear of a “lost generation” from low income countries. While likening the Corona Crisis to The World Wars when governments “forged a better world in the worst possible moment”, she laid emphasis on the importance of support for those who have lost their jobs due to the recession, and pushed for increased government spending to create a more equitable, prosperous economic system.

According to a report published by the United Nations Conference on Trade and Development, “Bold public spending is the only way to recover better from COVID-19”.

In conclusion, the Key(nes) to success during a recession based on our world’s past – are spending hikes!

What are Tax Cuts?

Essentially, tax cuts are changes in the law that reduce the percentage of tax payment that citizens at large are required to pay. Governments primarily follow this measure as an expansionary fiscal policy, i.e.an economic stimulus that boosts the economy by putting more money into taxpayers’ pockets.

Most of the time, tax cuts are used to end a recession, like the 2008 financial crisis. 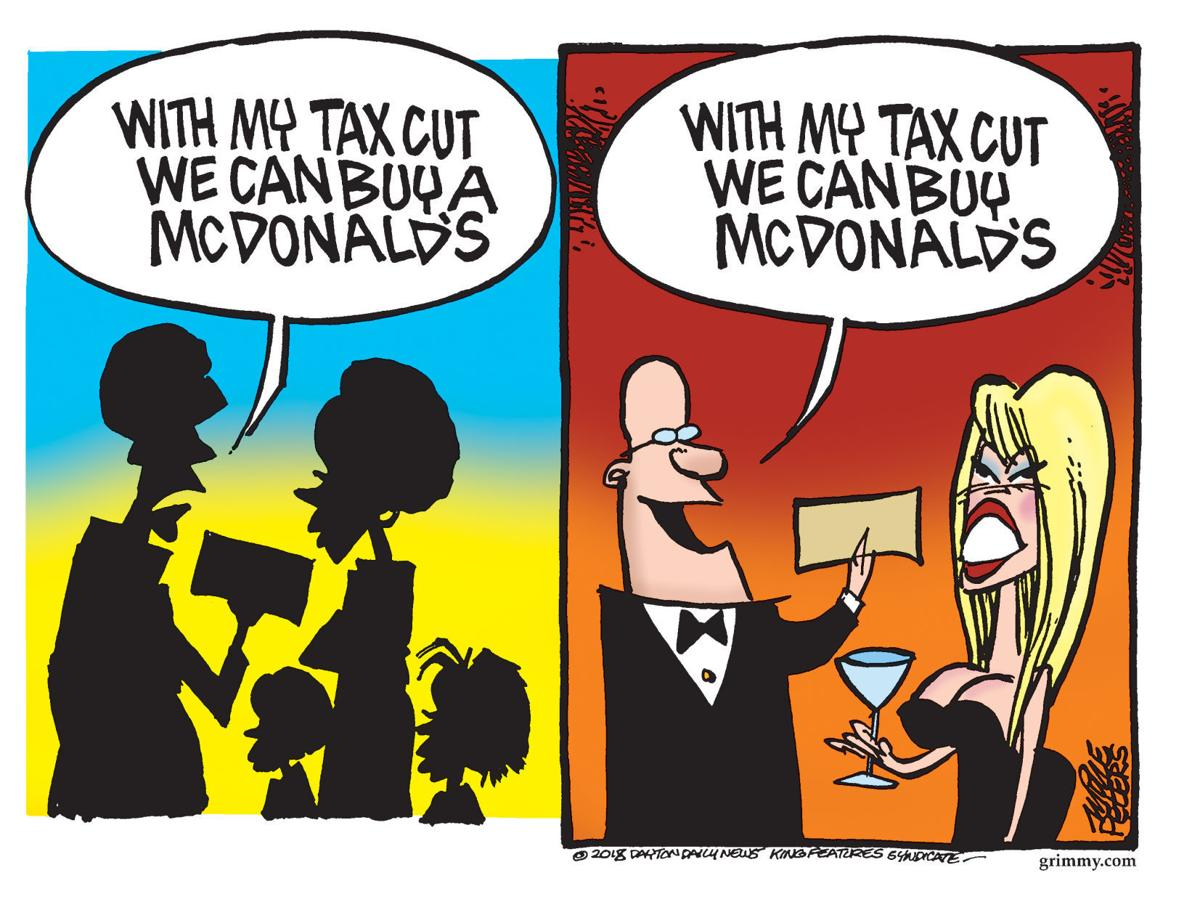 Stimulating the Economy, but at what cost?

Most economists agree that tax cuts boost the economy by putting more money into circulation.  Every worker, whether blue collar or white collar, sees an increase in his discretionary/disposable income. This extra money to spend ensures a rise in consumer spending at the macro-level.

A rise in said Aggregate Demand is nothing but overall economic growth for the nation.

However, the other effect of tax cuts is the reduction in tax revenue, forcing the government to borrow more and increase deficit spending. As a result, tax cuts improve the economy in the short-term but depress the economy in the long-term if they lead to an unmanageable increase in the federal debt.

However, the most important argument with this contention against tax cuts and increasing debt, is that in the long term, tax cuts pay for themselves. Economist Arthur Laffer explained that tax cuts have a multiplier effect on the economy. Many tax cuts, during the Recession, had a fiscal multiplier greater than one, i.e. they stimulated enough growth in the long run to eventually generate higher tax revenue when there was more overall money to be taxed.

For example, President Reagan cut taxes during the 1980s in the US and all projections were assumed for revenue shortfalls, or (if nothing else) no increase in overall taxation revenues. However, the taxation revenue from individual incomes nearly doubled from 244 billion USD to 446 billion USD between 1980 to 1989.

Income tax cuts can also increase productivity, which offset this fall in revenue. Tax cuts can thus often offer the best of both worlds: lower tax rates, but yet result in higher tax revenues and increased economic growth.

This is an advantage of tax cuts that even spending hikes cannot offer.

The “Laffer Curve“ argues that if you cut income tax rates, then the tax cut increases the incentive to work so much, that the government can actually gain more tax revenue. For example, lower-income tax rates may encourage people to work longer, and outsiders to move to that particular country. This is the substitution effect – work is more attractive with lower tax rates (when you keep more of your income).

Tax cuts also deal with another problem that spending hikes are not equipped to solve: tax evasion and tax avoidance.  Under a recession, lack of revenue forces workers to adopt behaviours that avoid paying taxes, such as taking jobs that pay under the table and not reporting their income. This is counterproductive towards the aim of recovering the economy.

Lower tax rates will increase confidence and general motivation, thus increasing investment, because the population at large feels less government intervention. The reduction in taxation also engenders loyalty between the government and its citizens, and through these abstract ways, encourages investment.

These are a few edges that tax cuts have overspending hikes while facing a recessionary situation in the economy.

In a practical, real-world situation, recessions are never fought with one or the other; it is a combination of both tax cuts and spending hikes that is employed as an expansionary fiscal policy to overcome the recession.

It is only these forms of expansionary fiscal policy that got the economy back to functioning normally.