After a decade of recession, austerity measures and poverty, the Greek economy is finally showing some signs of recovery. This makes us wonder- How did ‘mighty’ Greece turn into a case study for economists in the first place? While public debt is often thought to be the only reason for the economic meltdown, there were, in fact, several other factors at play. This was just one of those instances when everything went wrong for Greece.

Before delving deep into the crucks of this Greek catastrophe, it is important to understand a few related terms that played a key role in determining the outcome of this crisis.

What is Public Debt?

Public Debt, National debt, Government debt or sovereign debt, all refer to the cumulative debt of a particular nation. It is the total sum of money that has been borrowed by the government from lenders other than itself. In technical terms, public debt may also be defined as the sum total of all fiscal/budget deficits of the country. A budget deficit is simply a situation in which the government’s expenditure exceeds its revenue for a given year.

Debt in absolute terms is insignificant. A better indicator is relative debt indicated by the ratio of the total debt to the country’s GDP: Debt-to-GDP ratio. It is because a larger economy can withstand a larger debt burden without affecting its overall growth. Moreover, the economic output (GDP) of the country is also indicative of its ability to repay the borrowed sum to its lenders.

Now that we have familiarized ourselves with the key terminology, it is time to understand the saga of economic factors that intertwined with one another to create this anomaly.

The Economic Cost of Bad politics

The origins of the Greece public debt crisis date back to the dawn of the 1980s. The later decades of the 20th century saw inefficient management and unnecessary spending by the Greek government. In a bid to keep voters happy, political leaders promised lavish welfare policies without any serious consideration into their economic impact. The government engaged in excessive spending, even if it meant a hike in debt, to meet these unsustainable political promises. Moreover, such elaborate spending was not complemented by higher revenue. Rather, the dodging of taxes became so common a thing among the public that the idea of ‘legal tax evasion’ also emerged. Salaries of government employees rose automatically every year with complete disregard to performance and productivity. Lucrative and generous pension plans tempted many individuals towards an early retirement. The quality of human capital deteriorated, eroding the productivity and competitiveness of Greek labor and industry. This high expenditure fiasco financed by increasing public debt continued until 2001, when things took an interesting turn of events. 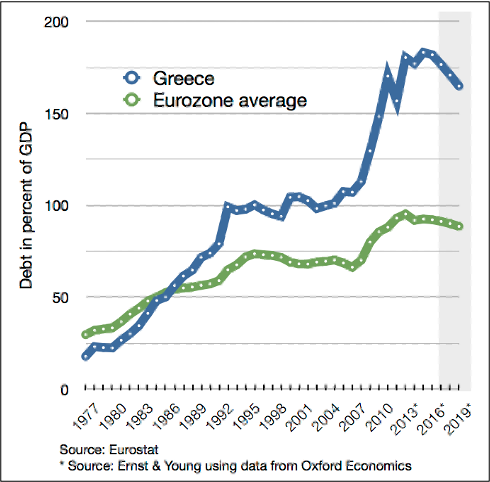 Greece, with the help of Goldman Sachs, covered its debt mountain and balance deficit, which was exceedingly above the 60% and 3% figures set by the European Union’s Maastricht treaty. Greece’s consequent addition into the Eurozone, though under false pretence, was like a lottery ticket. With the backing of the European Central Bank (ECB) and the credibility of the Euro, Greece was considered as a safe source of investment. Investors were much more willing to hold Greek’s debt which allowed it to borrow even larger sums at a lower interest rate. By 2001, the yield from Greek government bonds was at par with the rates of much more stable nations like Germany.

Here, bonds and their corresponding interest rates follow an interesting mechanism based on the economic principles of supply and demand. If a bond is perceived as a safe investment, investors will flock in great numbers to purchase it. The confidence of investors and consequent higher demand would decrease the interest rate, i.e., investors will be willing to lock-in their funds even at a lower return due it’s perceived low-risk nature. In contrast, if the risk associated with a bond increases, the investors would begin withdrawing their parked funds. Consequently, there would be a rise in interest rates, as greater returns need to be promised for investors to deposit their money. 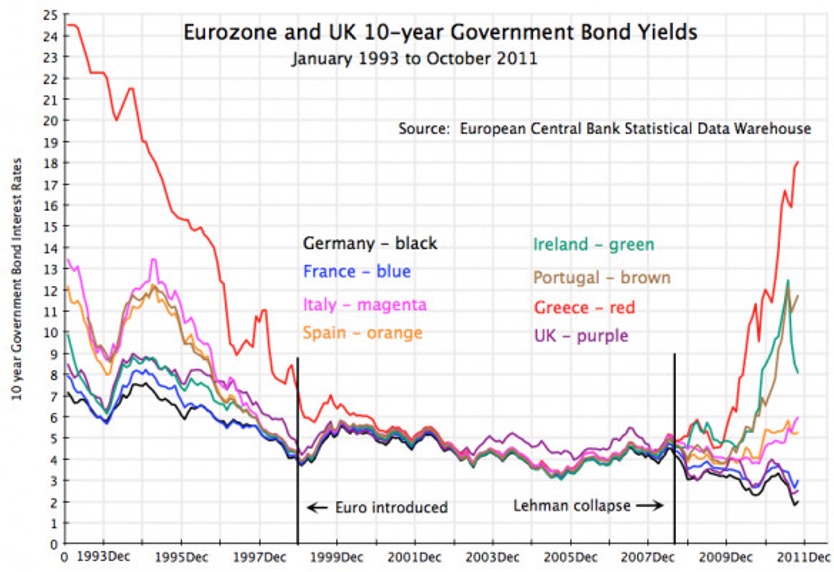 The tale of Greek’s excessive borrowing continues as its debt-to-GDP ratio breached 100%. The borrow-to-spend attitude continued until the wake of the Global Financial Crisis (GFC) of 2007-08. Amongst the panic caused by the GFC, investors and creditors focused on the colossal sovereign debt loads of the southern European nations and their fiscal mismanagement. In 2009, Greece announced its budget deficit at 12.9% of its GDP which was more than four times the EU’s 3% limit. Rating agencies like Fitch, Moody’s, and Standard & Poor’s lowered Greece’s credit ratings to a junk status. With default a real possibility, investors began demanding much higher yields for debt issued by the PIIGS (Portugal, Ireland, Italy, Greece, and Spain) as compensation for this added risk.  Yet, the problem did not lie as much in Greece’s public debt as it did in the nature of the debt. 70% of the total bonds were issued to foreign investors. This meant that the government was under immense pressure to increase its interest payments or liquidate the bonds. By the end of the GFC, Greece had been pushed into a recession fueled by a massive debt-trap and a decaying labor force. 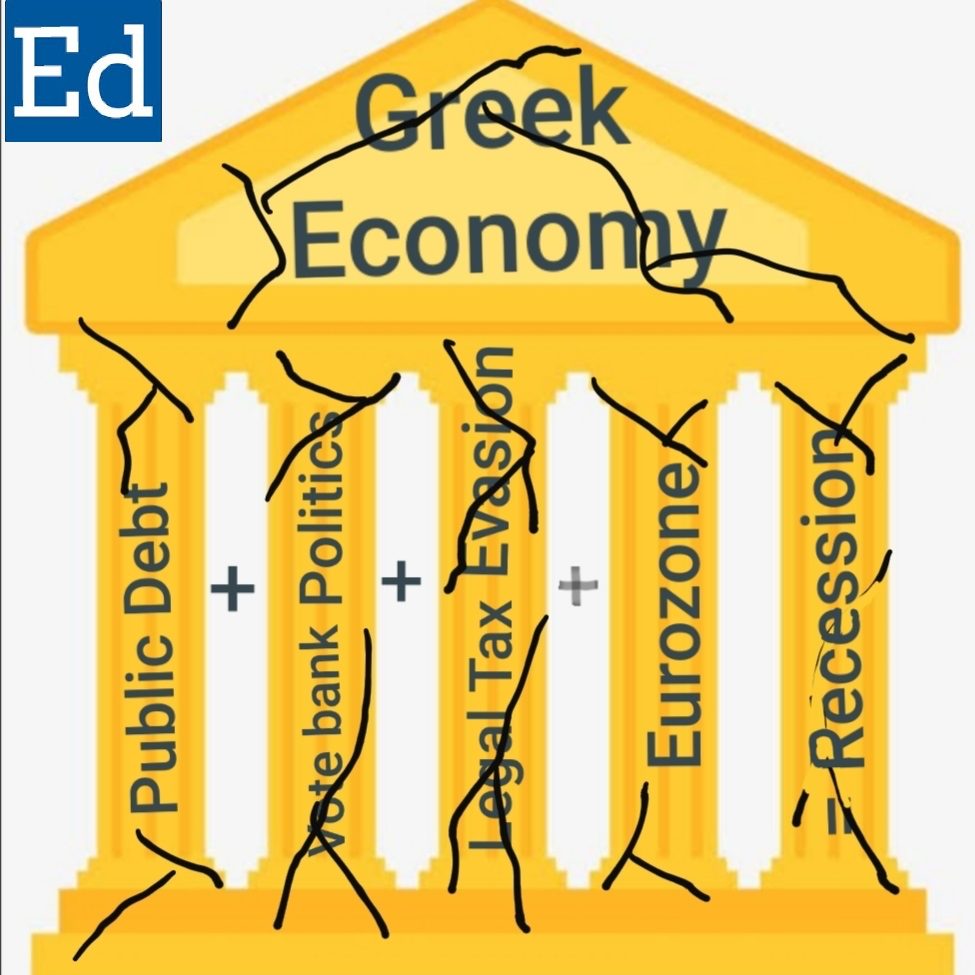 One of the most controversial decisions in the Greek debt crisis was its addition into the Eurozone. The adoption of a centralized country did provide Greece with the necessary balance and could have been an instrumental tool. However, for the Greek government, it was the perfect camouflage to continue its high expenditure frenzy. Joining the Eurozone did not clean the house but only swept the dirt under the carpet!

A fundamental issue with the idea of a shared currency was that while the Greek government was in control of how it wished to allocate its funds, it was the European Central Bank that controlled the issuing and printing of currency notes. This disharmony between fiscal and monetary policies for the Eurozone countries has often been a point of contention for many South-European nations. Thus, in the time of crisis, the Euro which was supposed to be Greece’s lifeline for stability was a major cause for the plunge. For countries like the USA and Japan, which are also burdened with high public-debt, having their own currency allows them to print the money that they owe to lenders. In practice, the bonds can be bought back by the central bank of the country in return for freshly printed government currency. While this does risk an inflationary spiral, it prevents too much sovereign debt in the hands of offshore investors and also allows for an exchange rate correction.

It is quite common to see countries in crisis devalue their currency in order to induce foreign investment. This could have been an especially useful tool for Greece considering its deteriorated but overpriced workforce.

No easy way out

While the subversion of Greece into one of the worst economies in Europe is partly to blame for by its own political mismanagement, it would be wrong to condemn it to the fullest. The disastrous outcome of this anomaly was the culmination of a large number of domestic, foreign, and political factors. Greece just happened to find itself at the junction of a large number of direct and indirect errors. 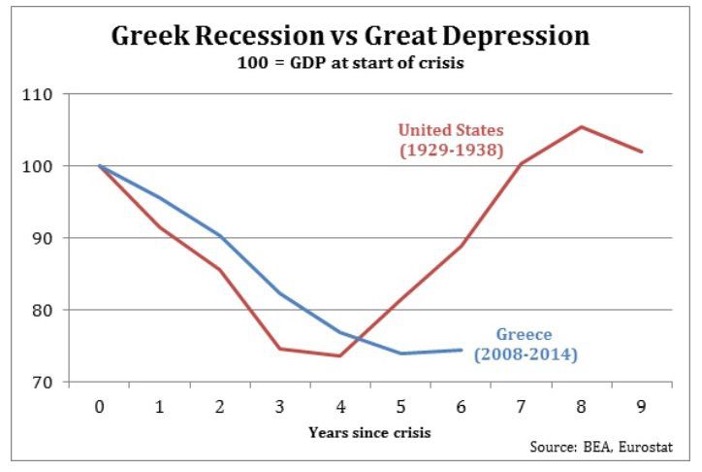 The crisis at its bottom was comparable to the Great depression in 1929. Unemployment rates touched 25% and the youth employment had crossed the half-way mark. The GDP per capita plunged and deposits saw massive withdrawal from Greek Banks.

Greece was in an economic sinkhole and there was no easy way out. The bailouts given by the Eurozone and IMF did throw a safety line, but they could only do so much. The following years were hard times with strict fiscal management and stringent austerity measures. And after a decade of a downturn, Greece saw a positive GDP growth rate and signs of recovery. The hard truth is that it is still an uphill climb from here filled with uncertainty and sacrifice. It may take years for Greece to regain its former size. But all we can do is hope for the glorious return of this “Cradle of Western civilization”.

Rathje, I. (n.d.). The euro crisis. Causes and consequences of the Greek debt crisis on the euro zone. Grin. https://www.grin.com/document/511713