We have often heard of the famous quote, “Diamonds are a girl’s best friend.” While that may seem exaggerated, most people, at some point in their lives, have longed for a diamond, either for themselves, or as a gift to a loved one. What enabled these stones to take the form of a status symbol or a token of love? The answer lies with one of the leading diamond companies, De Beers, which forms the base for every attitude a consumer has towards diamonds, today.

Let’s look at how De Beers, very strategically, formed a cartel in order to have a monopoly-like hold over the diamond market for nearly a century.

So, what is a cartel?

A cartel is a group (two or more) of independent producers who enter into an agreement to act as a single producer. Usually, the conditions conducive to the rise of a cartel are similar to those of an oligopolistic market, i.e, a situation wherein the market is dominated by a few players with maximum market share. The world’s largest and most well-known cartel is the 14-member Organization of Petroleum Exporting Countries (OPEC), which aims at unifying the petrol prices, through coordination, to ensure stability in the oil market.

What incentivizes firms to form a cartel?

Just like the two sides of a coin, the existence of cartels is a boon to producers but a curse to consumers, due to the resultant high prices and restricted supply. There is also a negative effect exerted on the growth of the economy as cartels discourage the entry of new players. Not only does this limit employment opportunities but also adds to the lack of competition we read about earlier. In contrast to what some believe, a lack of competition should not be seen in a positive light because it leads to stagnancy in research and development as the producers no longer feel the need to bring about innovation for better market reach. Due to such detrimental effects, cartels are considered illegal in many countries – the USA for example.

Cartels have a reputation of not holding their ground for too long due to external issues like we saw above or internal issues such as members deferring from agreements as there is always an opportunity to increase individual share of profits by cheating. However, the De Beers Diamond Cartel has marked its place in history by having stood strong, right from 1888 to the end of the 20th century, in the face of various storms. The brilliance with which it controlled the diamond market for almost a century, makes it a story worth telling. 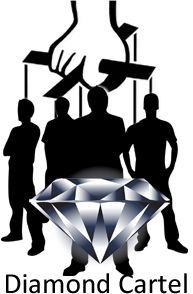 The story of De Beers

Diamond trade initially took place in Brazil and India, but later spread, with the discovery of mines in South Africa in the late 19th century. The story starts with a businessman named Cecil Rhodes, whose earliest association with the diamond industry was renting out water pumps to miners. The profit he earned from that was directed towards purchasing claims of small mining operators which led him to finally establishing the De Beers Consolidated Mines Limited in 1888. Diamond mining usually sees the merger of small groups to form a large one due to a commonality of needs and infrastructure, as was the case of De Beers, who became the owner of almost all diamond mines of South Africa.

What exactly did De Beers do that made diamonds appear much more elite as compared to other precious stones and minerals? Two aspects can be held responsible: an excellent control over the market and an immaculate advertisement campaign.

So, how exactly did it assert dominance over the diamond market?

What set De Beers apart from so many other companies was its technique of making the market work in accordance to its needs, rather than adjusting itself to suit the needs of the market. One of the most popular techniques to control consumer behaviour is to create an illusion of rarity, as it reinstates the belief that the rarer a commodity, the more valuable it is. De Beers revolutionized the working of the diamond industry by employing this strategy there. It successfully put forth an illusion of the scarcity of diamonds, which has been the key element fueling demand for the item even today. As the diamonds from its mines constituted only 43% of the total rough diamond value, De Beers knew it needed global control in order to prevent the illusion from shattering, which led to Rhodes forming distribution arms outside South Africa. These included the Central Selling Organization (CSO) in London and The Syndicate in Israel. De Beers convinced various producers about the importance of output regulation to project a scenario of scarcity, if they wished to get high prices. Ultimately, various diamond distributors and claim holders joined De Beers as they now had a common path to a shared goal.

Control over the supply side: Increasing role of the CSO

The strategy adopted was that the number of diamonds to be sold in the market as well as the prices, would be determined each year by De Beers, with each cartel member having a fixed share in the output and profits. All cartel producers were under contract to sell the majority of their produce to the CSO. It then had the responsibility of selling rough diamonds to 200 privileged ‘sightholders’ (authorized bulk diamond purchasers), who further sold the diamonds in the market. This highlights how De Beers was not only the sole purchaser and price setter, but also the major distributor of rough diamonds, allowing it to exert tremendous control over the diamond market, in accordance with its goals.

With such close monitoring of the market, it was able to maintain a high degree of price stability. De Beers, strategically, held on to the stock of diamonds during a slack period to uphold prices, and flooded the market with increased supply during a period of high demand. Interestingly, this technique was also adopted by the company to keep away competition.

For example, Zaire, another large producer of rough diamonds, decided to break away from the CSO and work independently. This was perceived as a threat to De Beers as a result of which it flooded the market with diamonds two months later, resulting in the price falling from $3 to $1.8 per carat which severely harmed Zaire’s revenue. Consequently, it soon sought a renewal of its contract with De Beers to avoid other perilous situations that moving away from the cartel would lead it to.

Control over the demand side: The power of advertising

De Beers skillfully managed to dominate the demand side for diamonds as well. Usually an area producers have no control over, De Beers made extensive use of advertising to make an impact on the minds of consumers. However, selling a product like diamond to the masses without it seeming like an item for the masses so as to maintain its standard, was nothing short of a challenge. In the 1930’s, De Beers , with the help of the advertising agency N.W. Ayer undertook the legendary ‘A Diamond is Forever’ campaign to target the audience of America, using subtle psychological convincing strategies. They promoted diamond as a symbol of love, making men and women believe that a diamond ring was necessary for an engagement. By convincing men that the size and quality of diamond was indicative of the degree of love, they made sure their advertisement was based on feelings of romance, tradition and elegance, thus making it wholesome in nature. The impact was large scale, with the percentage of brides with a diamond engagement ring increasing from just 10% in 1940, to 80% in 1990. It even went on to have an international effect, with 90% of Japanese brides owning a ring by the early 1990’s. In conclusion, De Beers proficiently controlled the demand as well as supply in the market, an achievement some could only dream of.

How did the downfall of the De Beers empire start?

Just as all great things come to an end, so did the De Beers cartel along with its monopoly on the market. With the discovery of new mines in Russia, Australia and Canada in the latter half of the 20th century, De Beers started losing some amount of global control. Moreover, the Argyle Mine in Australia and the Alrosa state-owned mine situated in Russia broke away from the CSO due to a variety of reasons. This saw the emergence of a new diamond market, one beyond the reach of De Beers. As a result, it lost its bargaining power to the new entrants and was left with increased stocks of inventory and costs. Its market share fell to 60% in the 1990’s from 90% in the 1980’s, highlighting how close it was to losing its dominance in the diamond industry. To add it’s the existing problems, in 1994, De Beers was accused of price fixing after colluding with General Electric for which it pleaded guilty in 2004 and paid a fine of US $10 million to the United States Department of Justice. Over the next few years, it faced similar accusations and lawsuits, bringing the company down even more. In 2000, it decided to make a strategic shift, to independent marketing of the brand.

Although, after a century, De Beers no longer has control of the market, it has still been making progress for itself. It has mines in Canada, Botswana, Namibia and South Africa today, and recorded a market share of roughly 29.5% in 2019. Despite taking a major fall after flying high for a century, the company is back on its feet and is continually formulating strategies for a greater market reach. It even launched its famous Forevermark brand in India recently, which has already made a name for itself. In conclusion, it is only fair to say that the De Beers cartel may have not lasted forever, but by making its tagline “A diamond is forever” come to life, its legacy sure has.

Is De Beers still a monopoly?