We’ve all read the news headlines about the value of the ”U.S. Dollar Dropping,” or about the ”Strong Euro Currency”. Next time you give an eye to them, you will know they’re talking about ‘Currency Wars’, sometimes called ”a race to the bottom.”

Currencies change in value in relation to each other. Usually countries devalue their currency, hoping to make it easier to pay government debt or to stimulate their economy. When a currency is devalued, it implies that the value of a currency is weakened against other countries. Example, when a consumer needs ₹100 for purchasing a gold coin one day and ₹120 for purchasing the same coin the next day, the currency is a weakening currency. For more than a decade, a weaker currency meant that the domestic companies could sell goods abroad at more competitive prices, in turn supporting their economic growth.

In 2015 we saw China devalue its currency by depreciating the Yuan by nearly 3-4%, a move that affected investors and politicians. China was a manufacturing paradise at this time. ‘However, the GDP rate had been lowering from 2008 to 2015. 1$ was worth 6 Yuan in 2015. So if the United States of America bought raw materials worth 500 million Yuan from China, it would convert to $83.33 million. But after the devaluation of the Chinese currency to 6.12 yuan equivalent to $1, the same company from the United States would have to pay $81.69 Million.’ So when a country devalues its currency it reduces the cost of its exports making it more attractive and competitive. At the same time, it makes imports more competitive, creating a shift towards domestic consumption and a service-based economy.

But today, with the cost of everything from fuel to food to appliances soaring, ‘strengthening the purchasing power’ has suddenly become the most relevant issue. What we see today in 2022 is a ‘reverse currency war’. Most central banks across the world are trying to raise their interest rates. Competitive appreciation arises in a context where everyone’s main macroeconomic goal, in addition to maximizing growth, is reducing their inflation rates.

Just as the United States “won” the war to devalue the dollar after the 2008 financial crisis, now it is winning the fight to strengthen it. The 9.1 % inflation headline in America was significantly worse than anticipated which forced the Federal Bank of America to increase its interest rates. The flip side of a higher rate of interest is higher returns on investments, which automatically attracts foreign investments. 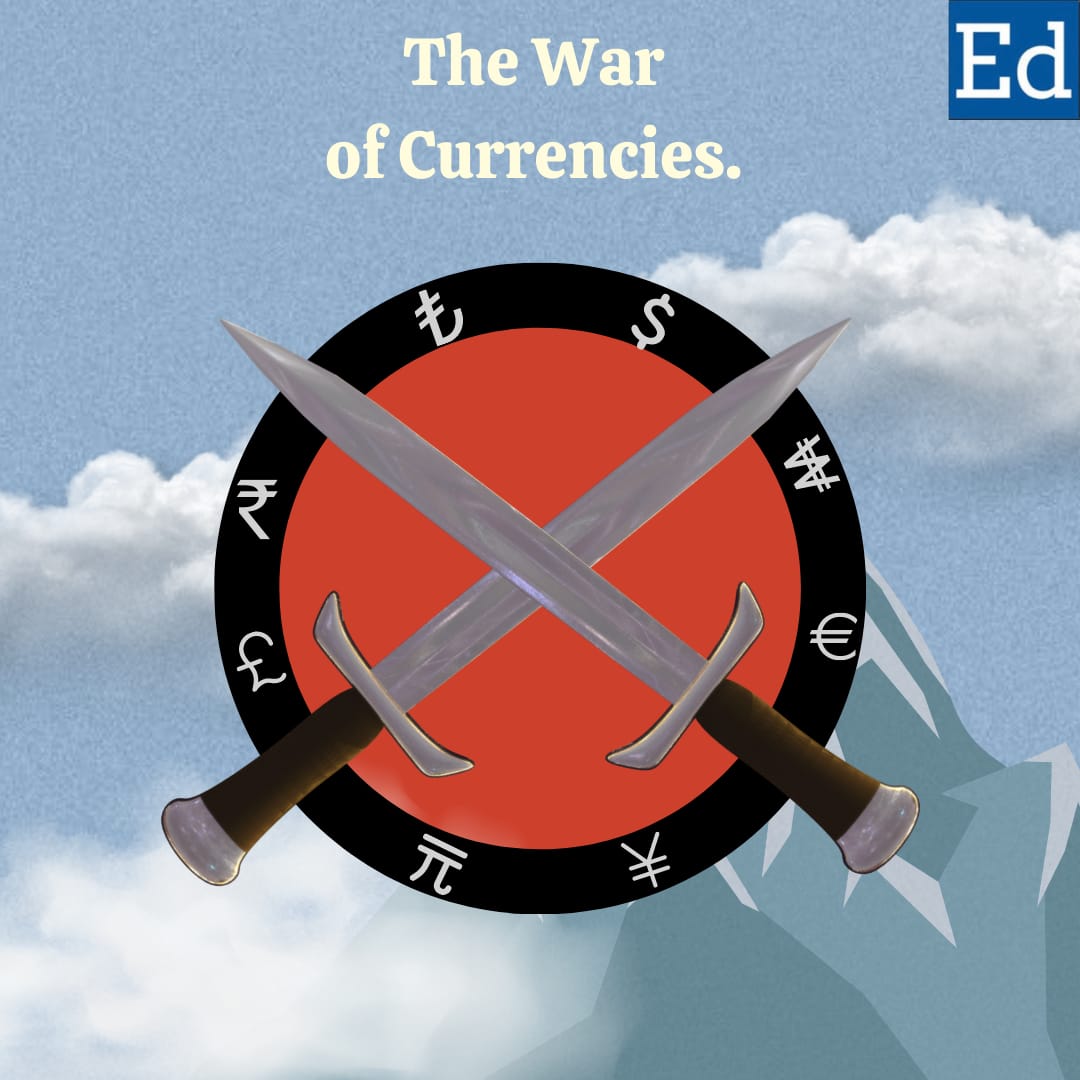 The countries with a weakened currency usually benefit from an increase in exports and strive to maintain a devalued currency. But with America increasing its interest rates and strengthening its currency, in the present global scenario we see other countries raising their rate of interest. This is done to counter America’s actions and ensure their own currency claws back in value against the dollar.

Usually, governments issue their own currencies and control their circulation within their jurisdiction. However, some currencies like the U.S. dollar, the Euro, and the Japanese Yen are recognised internationally. Most countries and international businesses globally accept the dollar as a means of payment. The U.S. dollar is one of the strongest international currencies because a stable economy supports it. The goods in a commodity market are quoted in U.S. dollars so it may seem intuitive that when the dollar rises, the prices of commodities will decrease.

Since many goods are priced with the dollar on international markets, a stronger dollar adds to the inflationary pressure by raising the cost of imports from other countries. When the dollar strengthens, commodities become more expensive in other, non-dollar currencies. Countries that buy crude oil and those that produce it exchange U.S. dollars in a system called the petrodollar system. Therefore, a stronger dollar has had a key benefit, importing cheaper crude oil. It makes sense that nations that are more dependent on crude oil exports have incurred greater economic damage than those with more diverse resources. At the same time, a strong dollar can also impact trade. Since the Dollar dominates international transactions, firms operating in non-dollar economies are highly dependent on it to settle trades.

‘On 11th July 2022, the RBI made a bold announcement that domestic traders could settle their trade in Indian Rupees, thus taking INR to a global level.’ This makes us independent of the American dollar as a trade medium of exchange, but can also potentially destroy our relationship with the United States and Europe.

During the war, Europe and America bullied the world with sanctions and cut Russia off from the ‘SWIFT network’ [Society for Worldwide Interbank Financial Telecommunications ]. The network works with all countries holding an American bank account and trading via the Dollar network as an intermediary with an exchange rate. For example, an Indian company with an account in the State Bank of India (SBI) wants to send money to another country’s enterprise, which also has an account with the Bank of America (BofA). The Indian company can do this by logging into net banking and entering the bank details of the foreign company, like the account number, branch name, and the SWIFT code. Once this transaction is initiated, the Indian bank [SBI] will send a SWIFT message to The Bank of America which will then be verified and cleared by Bank of America. Then the recipient will get the credit in their American account in dollars.

This not only requires dealing with complex fluctuations in the exchange rate, but is entirely controlled by the United States of America and Europe giving them the power to freeze a countries account as they did to Russia amidst the war. On top of that, the cost of transferring money adds to the payment cost by an interest of 1-5% . Iran was also banned from the SWIFT system in 2012 due to its nuclear program. This lead to a major loss in oil revenues and recorded a major slump as a result of this ban.

As an effort towards independence from this network, The Reserve Bank of India took a move to start a “Vostro Account” to facilitate global trade in rupee. This is an initiative towards internationalising the Indian currency in the long run, as well as ease India’s trade with Russia in the short run. This new RBI policy allows a transfer of payments with a ‘Vostro Account’, a foreign bank account held by foreign countries in India with which it can trade. This bypass from the Western-dominated ‘SWIFT’ system will help the INR against the U.S. Dollar. We don’t need the dollar for our imports if Russia, Iran, UAE, Venezuela, etc. were to trade with us in INR. This will not only reduce the pressure on the exchange rates but also increase India’s capacity to clench the growing needs of developing countries. Strained by surging dollar prices, switching to the Indian rupee would make the currencies of developing countries stronger against the dollar by trading with India.

Aristotle once said, “It is more difficult to organize a peace than to win a war, but the fruits of victory will be lost if the peace is not organized.” Today’s world deviates from classical wars to one where blood may not be shed and instead of a race to the bottom in the foreign exchange market, we may see a scramble to the top.

What Is the SWIFT Banking System? (n.d.). Investopedia. Retrieved August 7, 2022, from https://www.investopedia.com/articles/personal-finance/050515/how-swift-system-works.asp