The beloved phrase from “Narcos” perfectly describes the Narcotics business and the works of most organized criminal entities. Either get paid handsomely for the work that you do or face the wrath of a lead bullet.

From the Italian and American mafias to the Colombian and Mexican drug cartels, the story of organized crime is much deeper than blazing guns and fancy suits. It is no news that many of them are, quite literally, ‘filthy’ rich. The supreme authority, god-like status, and lavish lifestyle associated with the top-tier class of these organizations is no different from what we often see and adore in movies. But the exact finances and functioning of these organizations is another marvel. How do they create enough wealth to dwindle the conscience of any man? And what are the business models and revenue structures behind these entities?

One of the primary sources of revenue and the golden hen of most organized criminal organizations continues to be Drug trafficking. And the cocaine trade is the ultimate golden egg. It also possesses one of the most astonishingly rewarding supply chains in the industry. 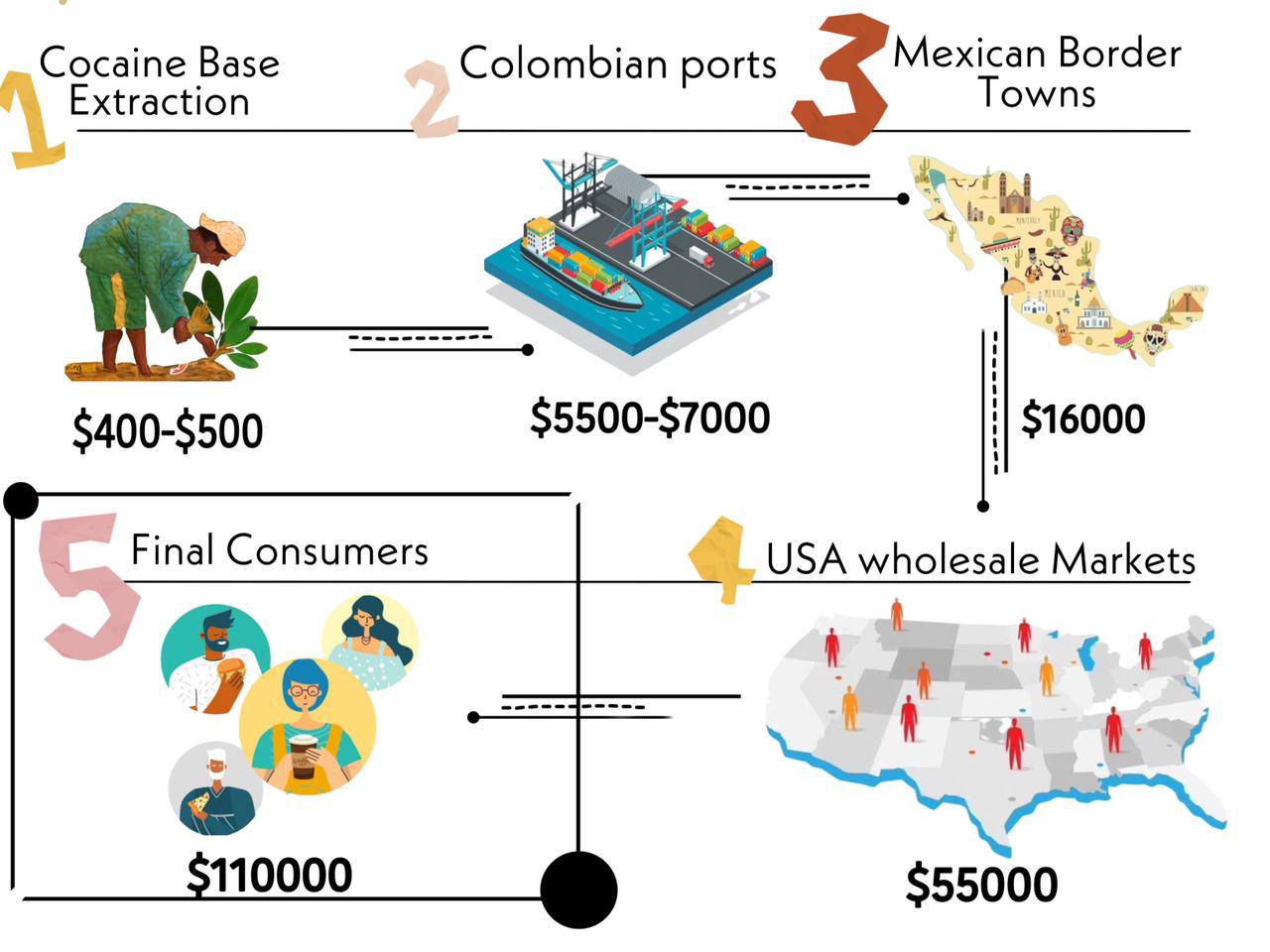 The drug is produced from the leaves of the Coca plant cultivated only in the Andean-Amazonia region. This means that Columbia, Peru, and Bolivia account for all the coca harvested in the world and hence possess a monopoly over its supply. In the first step of production, over 400 kgs of dried coca leaves is used to extract a single kilogram of ‘cocaine base’. A series of steps involving ammonia, gasoline, calcium carbonate and concentrated acids finally give rise to Cocaine Hydrochloride or simply Cocaine. A coca farmer in Columbia can expect between $400 – $500 for the dried coca leaves required to produce a kilogram of cocaine. The final drug is moved through Colombian jungles, domestic ports, and international borders. By the time it reaches the border towns of Mexico, the same kilogram is worth $16,000! Move a little further into the US wholesale market, the price has hiked to $55,000/kg. After continued tax evasion, smuggling, bribery and violence, the drug reaches the final consumer at a rate of $100 per gram or a whopping $100,000/kg. Moreover, the drug faces diminishing purity as middlemen and cartels at every stage try to maximize their margins. The unregulated and illegal cocaine business creates one of the most intrinsic networks of limitless profit restricted only by one’s conscience to murder, loot and deceive.

An interesting characteristic of this business, highlighted in Tom Wainwright’s “Narconomics”, is that of a Monopsony. In contrast to a monopoly, such a market structure consists of only a single dominant buyer instead of a lone seller. But how does this impact our farmers? Typically, a large area of land is often controlled by a cartel. This meant that farmers under its jurisdiction could only sell to their respective cartel. Thus, even though there were hundreds of farms dedicated to coca production, they had no influence over the prices. The existence of a single buyer created a compulsion to sell produce at the rate decided by the cartel. This is very comparable to the Walmart stores across the US. The suppliers are forced to sell their produce at extremely competitive prices due to lack of alternate buyers. The only difference is that the monopsony with coca farmers is one based on violence and brute force of the cartels rather than financial superiority. The farmers’ vulnerability to brutal consequences and punishments was the basis of exchange. 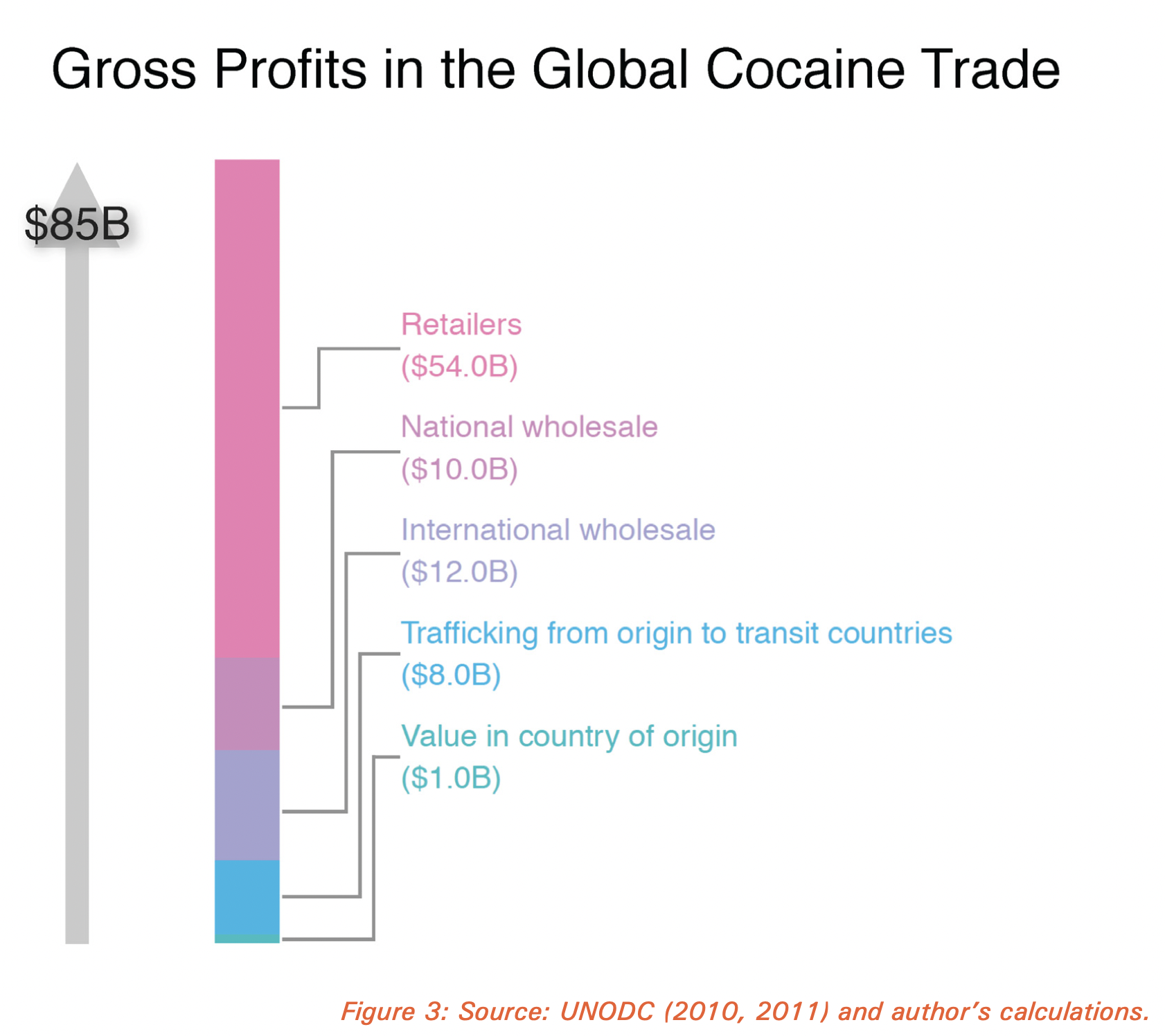 As visible from the given figure, the wealth distribution from the business was concentrated towards retail distributors. The cocaine trade had exponentially reaped the benefits of outsourcing their production activities. A saddening feature is that, to counter the trade of drugs, governments resorted to burning cultivable land which affected the marginalized producers more than the cartels governing the production. The farmers are forced to bear the brunt of the cartels as well as their own government.

It is clearly evident that the process of transporting a kilogram of cocaine from a farm in Columbia to a user in the US is simply too tedious for any single organization. Thus, there often existed a symbiotic relationship between the South American cartels and the American Mafia. While the cartel would engage in delivery up to the United States, it was both parent cartels and mafia, working in collaboration, that handled retail distribution.

To tackle this complexity, the groups resorted to  the concept of ‘Franchising’ on a micro-level. They contact, hire and train local dealers to supply their products. The relationship between them is a symbiotic one: the dealer would give a share of his profits and in return use the name of the parent cartel as a validation. However, the two entities differ in their motives and objectives for expansion.

Think of a single dealer like a Subway outlet. Subway, as an organization, is under constant effort to increase the number of its franchises in every locality to increase their overall fee collection. This may even mean multiple outlets in the same locality and in close vicinity to each other, all with the objective of boosting revenue. However, an individual outlet functions with an opposite outlook. It tries to cut down any competition in its locality to capture as much market share as possible. Similarly, an individual dealer tries his best to minimize or completely eradicate competition. The only difference lies in the fact that a dealer may resort to assassinations and murder.

While drug trafficking does hold a significant position in terms of financing our ‘organized’ criminals, an irreplaceable source of revenue is offering protection services. These were and continue to be of extreme importance, especially to the American Mafia.

The model of these services also mimicked various legal organizations with unorthodox twists to exponentially increase gains. Such services flourished in areas with poor law & order and political jurisdiction. This meant that mafias and gangs took advantage of this power vacuum to bridge the need for safety and protection. Ideally, the criminal entities would enter a contract with various shops and stores. They pledged to provide security in return for a fixed fee and expanded this model across hundreds of establishments.

Well up till now, this seems like a fair and legitimate business and does not seem quite “mafia-like”. However, the interesting aspect was that more often than not the Mafia provided protection against their own criminal activities. Quite smart, isn’t it? This meant that the fee was a compulsory payment made to the gang. If it was not given, the shop keepers would face robberies, ransacking and even attempts of murder. Hence, in such a way they created an ‘anti-business’. In contrast to a conventional business that profits by providing and creating value, the Mafia based their profits on their ability to take value out of a system and provide the same service themselves. Think of it this way: A gang member offers security to a shopkeeper for a fee of 100$ a month. If the shopkeeper rejects the offer, the gang hires a local thug to ransack the shop. The shopkeeper, considering a monopoly, is forced to approach the gang. Hence, the service provided in this case arises out of a need that is created by the mafia themselves.

The business of organized crime has continued to prevail over the hundreds of years. While they are harbingers of violence and calamity, their exceptional management techniques and revenue models put no doubt onto their goliath cash mountains.

The Drug Problem in the Americas: The Economics of Drug Trafficking. (2021). http://www.cicad.oas.org/drogas/elinforme/informedrogas2013/laeconomicanarcotrafico_eng.pdf

Mexico’s Cartels and the Economics of Cocaine. (2013). Stratfor. https://worldview.stratfor.com/article/mexicos-cartels-and-economics-cocaine